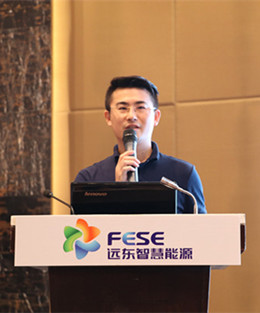 The speech by the Chairman of the Board

Far East Smarter Energy hopes to become a Smarter Energy Expert,  a global leader in providing Smarter Energy and Intelligent City System Service  that is greatly loved by its employees and highly respected by the society.

It also hopes to achieve “contributions to the country with the industrial performance” through unremitting efforts.

When recalling the past 25 years since the establishment of Far East Smarter Energy, we remember each step we made that connects to form an accurate and beautiful dance at different times and under different business backgrounds that has inspired us, and guided the industry.

In 1997 when private enterprises just started to display the robust buds, we had successfully established a composite-ownership enterprise jointly with the State Grid, China Huaneng Group, China Huadian Corporation, and Jiangsu Electric Power Company. Today, composite-ownership has become a national will for state-owned, private, and foreign enterprises to mutually build a brilliant China.

In 2002 when carbon fiber conductors were still belonging to a concept as an alternative product in the era of "Post-grid" first appearing in the globe, we had introduced the "young and tiny" ACCC into China, carefully taking care of and cultivating it to help it grow and get mature. Today, the carbon fiber conductors have became an explosive strength on verge of breaking out.

In 2010 when the electricity business companies were still studying how to explore the B2C and C2C market, we had started the "One network based on two platforms", and made a layout for the vertical B2Bs in electrotechnics and electric field, determining to build a big database of whole-industry chain to create information flow, capital flow, large logistics flow and service flow, a four-closed-industry ecosystem. Now, the "Internet Plus" action plan has began to rise to a national strategy.

In 2013 when people were still thinking about and exploring energy interconnection and energy end-to-end management, we had decided the strategic positioning as a "Smarter Energy and Intelligent City System Service Provider". Today, the energy network strategy has already started its top-level design.

In 2014, after we completed a new layout in the energy sector, we renamed the company as Far East Smarter Energy Co., Ltd. We did that, not for a conceptual speculation, or to satisfy the market demands, but because we are deeply aware that we are in an era of interconnecting all things that energy can be smart and interconnected. So we select to adapt to the times trend, switching from the traditional power distribution facility manufacturing to operation and maintenance of Smarter Energy projects. Now, we have already courageously and confidently realized such a strategic transformation.

In 2015, we continue to adhere to the development strategy focusing on both endogenous growth and extensive expansion, make a full use of the capital market platforms, firmly grasp the opportunity of integration for Smarter Energy and Energy Internet industry chain, and actively seek acquisition opportunities existing in the electrotechnics and electric field.

With continuous progresses in the new electricity reform, a trillion-valued market of Energy Internet is gradually initiating. In its future development process, Far East Smarter Energy will constantly uphold the mission of "creating value, serving society", striving to enhance the core competitiveness, and promote a healthy, steady development in the whole industry.

Although we will encounter various difficulties in the process, we have full confidence that we can go faster, go further and go more steadily in the fields related to Smarter Energy and intelligent city, with our extensive understanding of the industry, and a high-degree unified awareness of all the Far East employees in thinking.